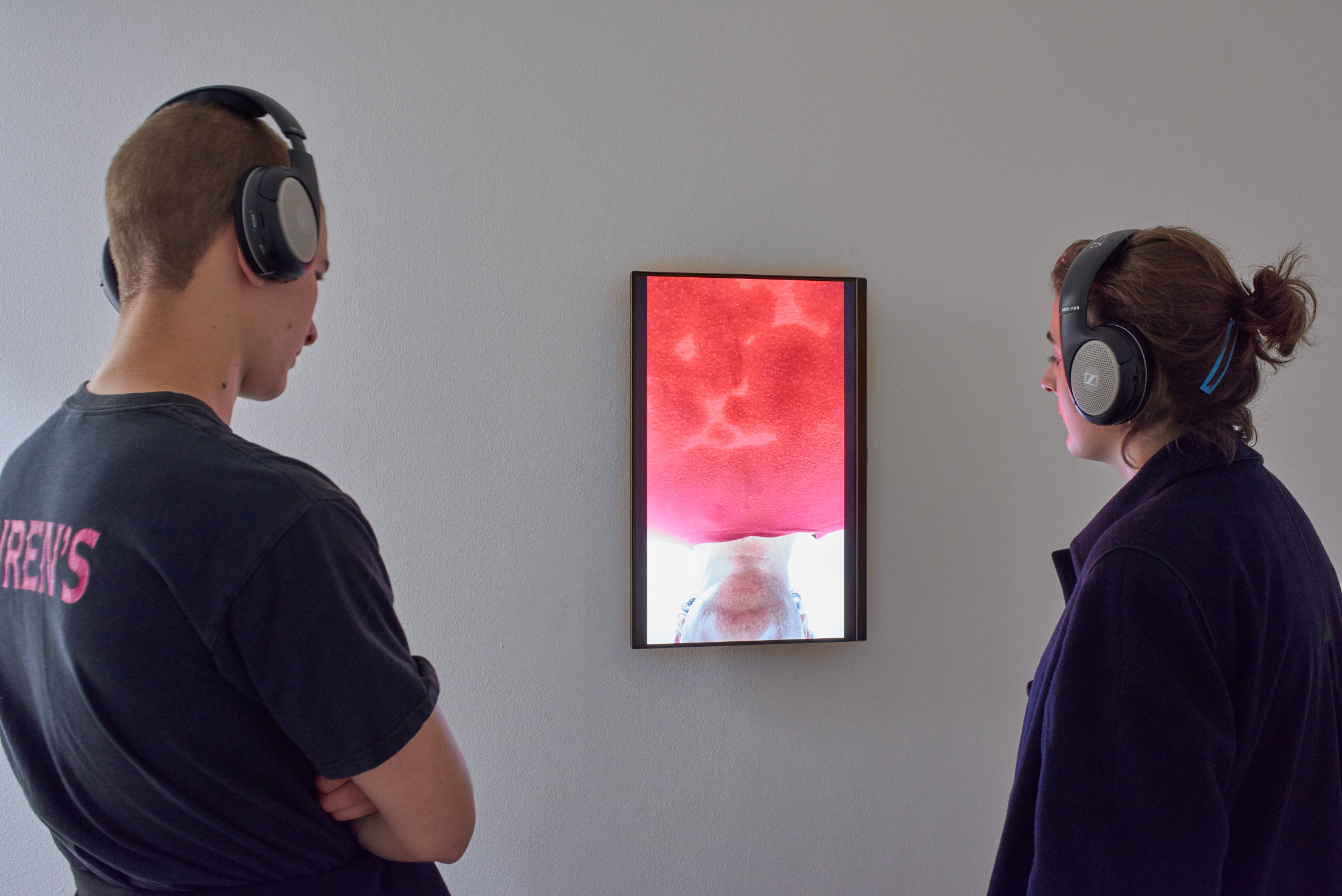 Juan Cruz admits it: I don’t know what I’m doing but I’m trying very hard. [1] The confession becomes the title of this work, which consists of twelve randomly played videos lasting in total about thirty minutes. But don’t let us confuse Cruz’s confession with his autobiography. Speaking in the past tense and eschewing the first-person narrative, Cruz forgoes speaking in his proper name. He adopts a sometimes witty and often ironic distance from his assumed subject to describe himself as if he were a someone else. Cruz performs the identity of a nameless artist and by so-doing puts subjectivity, or the idea of the self, on trial – potentially leading to its execution. Perforce, we find ourselves asking: who is the subject of the work? And more, who is the ‘he’ of which the monologue speaks? I don’t know what I’m doing but I’m trying very hard. thereby questions and blurs the identity of the narrator, of Cruz and his supposed referent, the artist.

Akin to the ‘heteronyms’ invented by the Portuguese poet Fernando Pessoa, Cruz’s videos provide a release of sorts from the shackles of unitary identity. In an undated fragment (ca. 1909), Pessoa writes:

I am variously others than an I who does not know whether I exist (or is those others) ... I conceive myself multiple.

Pessoa’s work illuminates the nature of being: human beings as speaking beings are heterogeneous by nature. Thus, Pessoa shatters the idea of a subject as identical with the self. His heteronymic identities liberate the singular so that a multiplicity of selves can proliferate. Pessoa’s subjects are subjects that are not subjects of themselves.

Similarly, the ‘subjects’ Cruz invents are authentic but non-identical: an upside-down, speaking being monologues breathlessly. The suite of videos represents an intelligence or sensibility, rather than what we might think of as a character. The narrator speaks as someone who is above all trying to work out who, if anyone, this someone is or could be. Having said that, he is not particularly concerned with the psychology of the artist; rather, he is interested in exploring a problem or issue that is not, after all, identical with a someone, or even, for the artist, as he puts it, ‘a body of work’. Cruz, as author, represents a problem, although the answer is not readily available.

Undoubtedly, the most serious dilemma is not just what to create but how to be an artist who is struggling with who an artist can and cannot be. The work explores the desire to know what being an artist is or might be. It delves into the possibilities of distinguishing between different modes of fulfilment to find forms of life and art that are other than contingent, opportunistic, and, at their most extreme, even desperate.

In the exhibition, the order of the videos is shuffled and spectators view the work haphazardly. The point at which the videos are watched will change the arc of narration. Nonetheless, the monologues force us again and again to wonder whose ‘voice’ is being heard. We cannot be sure who the ‘he’ is that is being referred to, and who is thus always ambiguous. 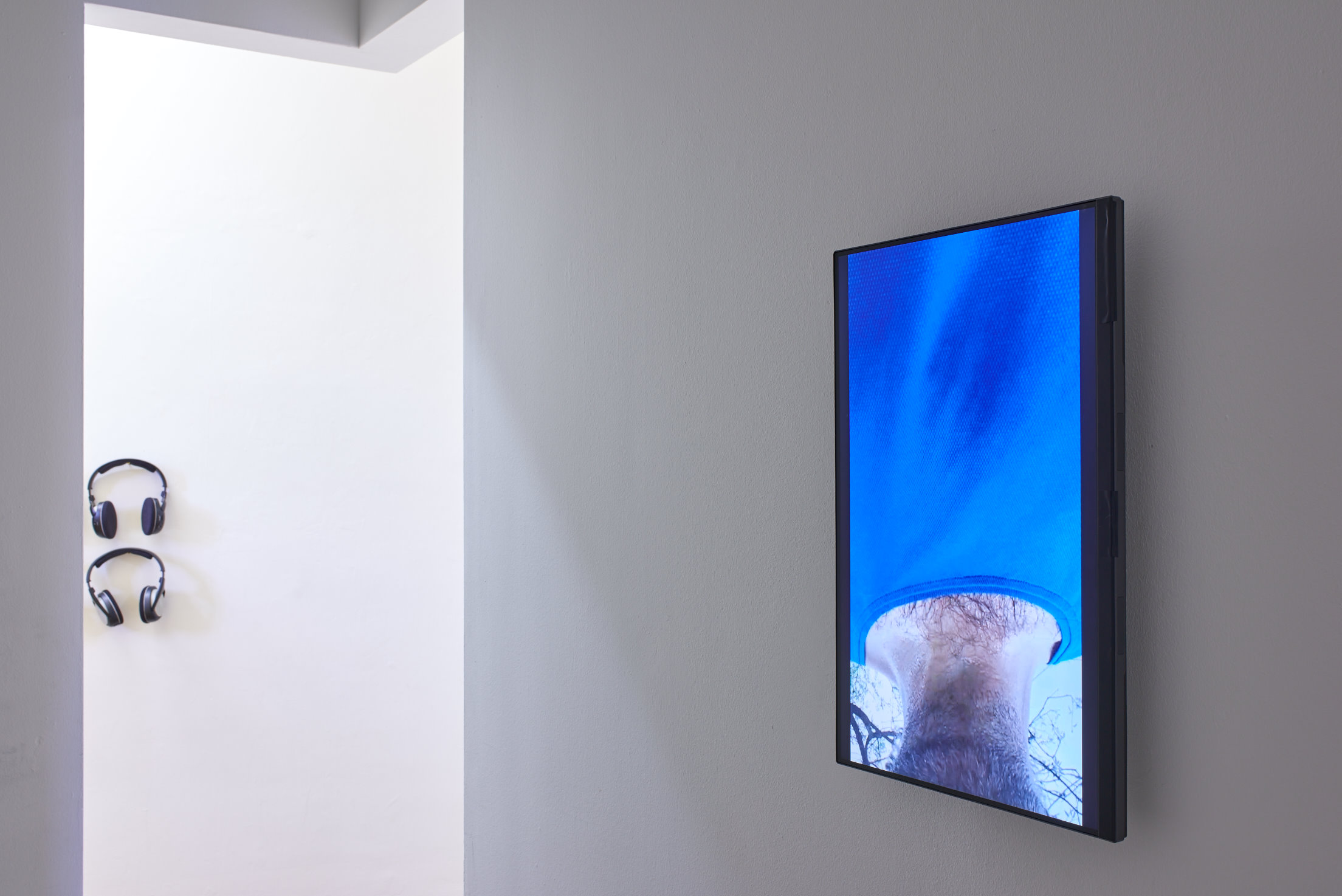 The putative artist, the narrator worries, is ‘conflicted’. Always wanting something other, he is dissatisfied with what he thinks he is supposed to want. Echoing the Romantic view of an artist, he would have ‘liked to have seen himself as someone who produced work in an isolated solitary way’ but ‘he never really managed to do that successfully’ (White 1). The narrator goes on to explain that the artist ‘is always drawn into relationships with the contingencies of the exhibition, and even more so, the installation’ (White 1). He is subject to the exigencies of a collaboration, which the narrator suggests can be seen as strength but also as its reverse (White 1). A contrarian or a dreamer, we are told, the artist would like to be a songwriter able to enjoy the ‘uselessness’ of his work (Old Blue 2).

The narrator is ruminating, following runs through the streets of London (Untitled 1) and the south of France in the summer of 2018 (Light Blue 1). The monologues are not flowing ‘streams of consciousness’. They judder in time with the pace of his walking, his breathing and his speaking. He gasps for breath, thus punctuating and dramatising the spoken words. While the words are always articulate, they are not always enunciated clearly. A ploy, perhaps, to make us listen harder, and consequently ensnaring and even misleading us? We are led to think that if we concentrate hard enough, the utterances might really be telling us something that we have yet to understand but which eventually we will be able to grasp fully.

Time shifts as the narrator advances or slows down. In some of the videos, the sound is interjected by the noise of traffic in the street. Others show glimpses of recognisably London houses and tree tops (Old Blue 1 and 2); while others, again, show the blue cloudless skies of the south of France (Mid Blue) where the silence of the countryside is distinctive. Never stopping, never coming or arriving, the narrator and artist appear to merge. A narrative takes shape, inviting us to wonder from what, from whom or from where the various subjects have been running? Running towards, or perhaps away from, all those identities listed by the narrator as unfavourable in the quest to be an artist nowadays? (Mid Blue 1) 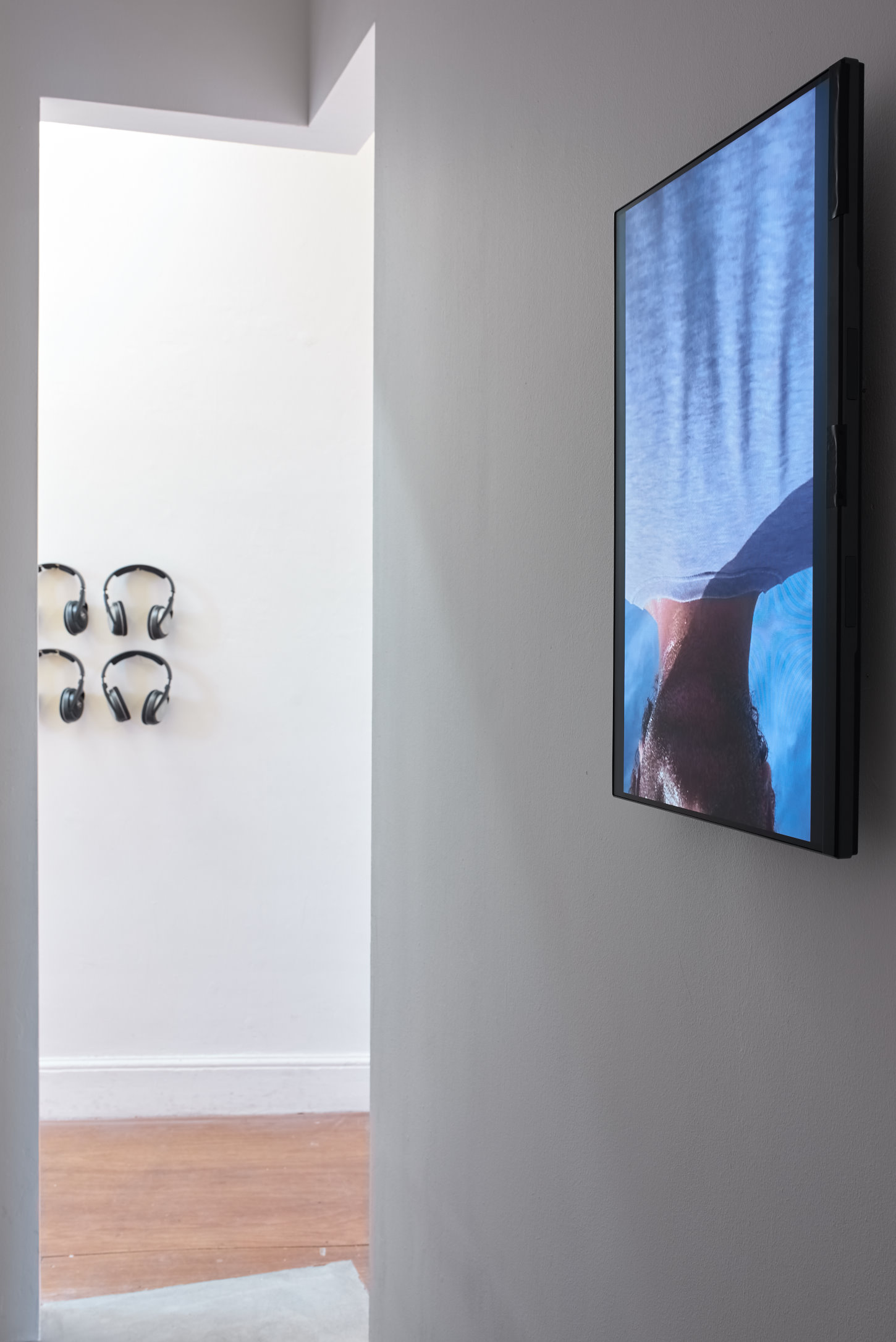 The artist’s career is defined by and within institutions, which the monologue resignedly suggests is antithetical to the experience of being a studio artist. He also reluctantly confesses that the artist maintains a studio but is hardly ever there – ‘there’s just not time’. The speaker reveals more: the artist is not really cutout to work as a full-time studio-based artist.

Contradictions to these revelations abound. The narrator also proposes that for the artist the idea of a coherent practice connotes ‘tedium, sluggishness’, so perhaps, the speaker wonders, the most interesting challenge is for him to make work that fits with or is shaped by available time (Mid Blue 1). However, it seems, as he also discloses, that the artist is becoming reconciled to the contingent and fragmentary nature of his work.

The artist in question, we learn, is white, of middle age and class and occupies a powerful role in the academy, and beyond. Cruz himself is now Dean of the School of Art and Humanities at the Royal College of Art, London. The narrator lists what Cruz thinks he is giving up, but not what he was giving it up for. ‘What does it mean to carry-on regardless?’, he asks.

This someone is ‘conflicted’ (White 1) − a measure of his anxiety about being fixed in a given identity. He doesn’t care enough about work to make a coherent body of art (White 1). He is, at the same time, ‘resigned to the fragmentary nature of work’ (Light Blue). He also acknowledges the precariousness of any relationship to making art and − is this desperation, or a provocation? – without necessarily caring about it.

He is afraid of being found out, for not being concerned enough? (We can only wonder what is enough). Remembering the words of a Nirvana song, sweating heavily, he reflects: ‘because you’re paranoid doesn’t mean they’re not after you’ (Untitled). Not having a clearly defined artistic identity or practice weighs on him. Inevitably, questions are raised again: ‘who’ is speaking? And what might a legitimate or true artist or practice be (Mid Blue1)?

These videos are not only monologues to be heard but also images to be seen. They are shot from a mobile phone that is held upside down. This at once attached yet detached prosthetic limb shakes, its roving eye shudders and brings to mind Russian filmmaker Dziga Vertov’s reported reflections: ‘I’m an eye. A mechanical eye. I, the machine, show you a world the way only I can see it’ (1922). The lens of Vertov’s camera knowingly unmasked the assumed realism of analogue film. 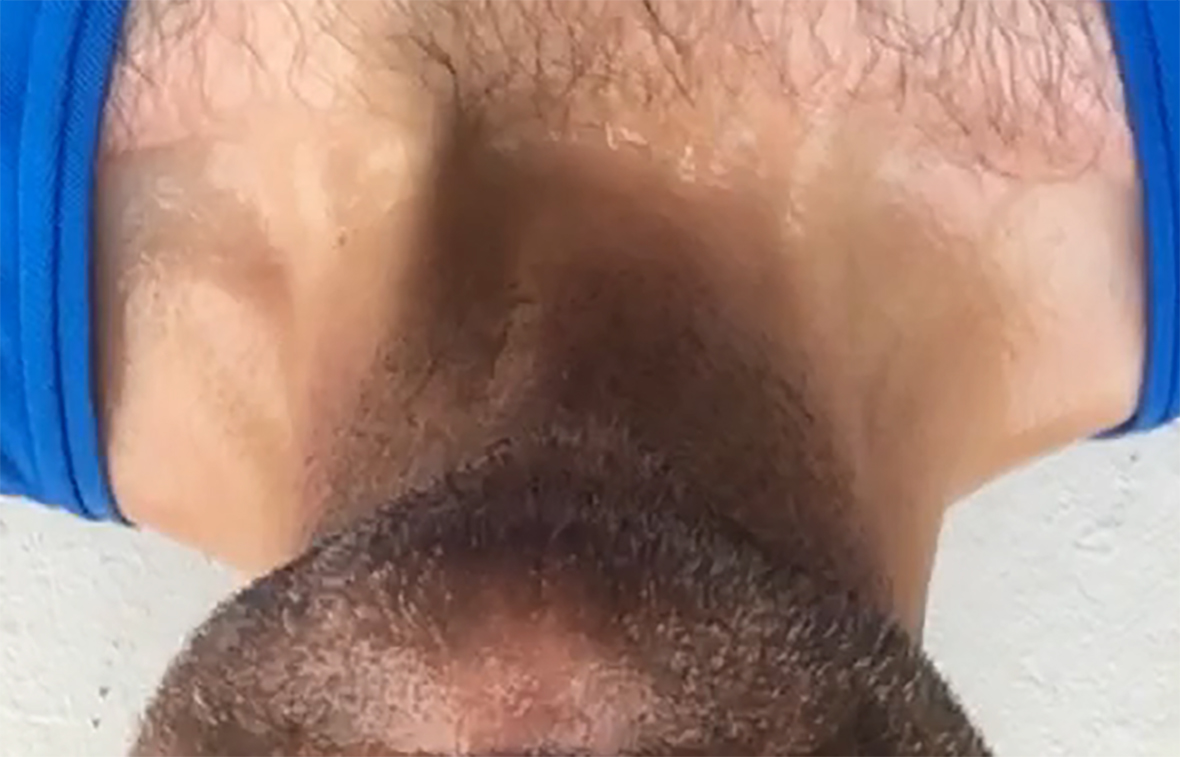 Cruz’s digital images produced through the lens of his phone quote the contrivance of the ‘selfie’, echoing the need for approval but challenging the presumed authenticity and narcissism of the selfie mode of visual production. Moreover, in I don’t know what I’m doing but I’m trying very hard., faces are never seen, and the gaze of the viewer is not acknowledged. All we ever see, viewed from below, is the chest and neck in constant motion. The orientation of the camera ensures that the chest more-or-less fills the screen.

Deliberately framed in the installation of the exhibition, the videos draw attention to performance. Artistry is apparent in the careful staging in the white box that is the gallery setting. The videos are back projected and revealed through an aperture that has been cut into the gallery wall. The gallery itself is small (3 x 3 x 3 metres) and the projection scaled accordingly, creating a sort of intimacy.

The t-shirts suffuse the images with colour. The striking colour variants of the t-shirts are carefully chosen and orchestrated. The excitement and pleasures of textures and colours are to be relished and enjoyed for their own sakes and bring an auratic quality to the images. The different hues of the t-shirts are all carefully chosen. Cobalt blue, whites and peach (Untitled 2) provide each video with an individual tone and resonance, and also with the colour chart of many of the titles: Mid Blue, Old Blue, Light Blue, White 1, etc. At times, the strong colour of a t-shirt bleaches the shade of the sky. Sometimes strong sunlight ruptures the integrity of the torso and the image itself, at others the colours are intensified by the sweat of the body, staining and deepening the tone of the t-shirts (Light Blue 1). 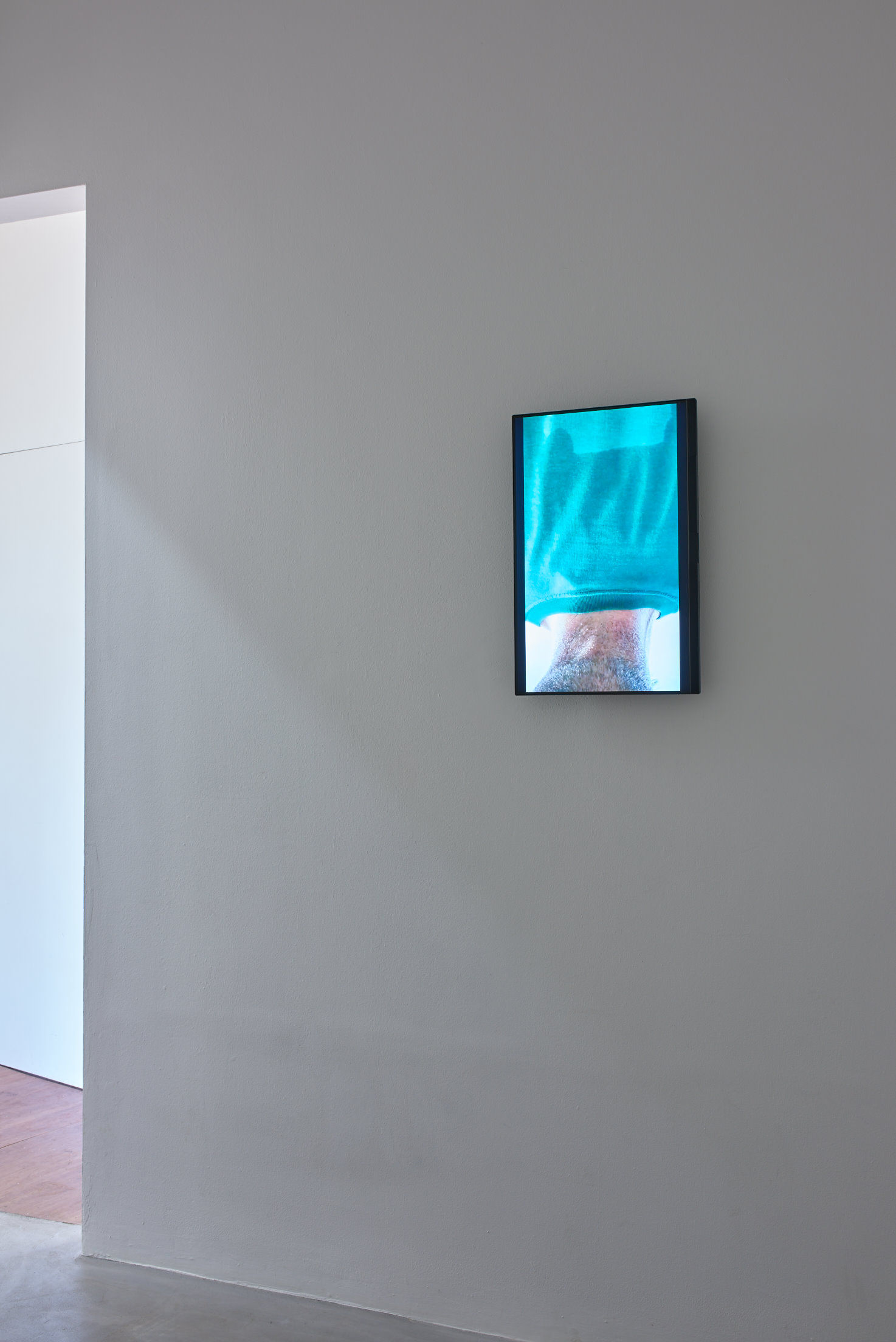 Is this work of Cruz’s a work of searing honesty, or arch naiveté? It is probably not simply either/or. But the work repeatedly lures us into asking this very question. I don’t know what I’m doing but I’m trying very hard. shows simultaneously what it is like to know and not to have a clue, unlike Pessoa’s heteronym, the shepherd, who solemnly announces:

Cruz’s subjects do not stop trying very hard to make sense of it all. The work represents the desire to know. But self-knowledge is the problem, not the solution.

What Phillip Roth found most odious, he once said, are people ‘who hide the places where they’re split’. [4] In other words, Roth was reviling those who pretend they are simply one thing, self-evident and straightforward. The subjects of Cruz’s video are riven and contradictory. I don’t know what I’m doing but I’m trying very hard. gives voice to inconsistences, uncertainty, regrets, but also to images of the pleasures of the life of the senses. The work can stand as a critique of the integrity of the subject and body (of work), of self-presence, of interiority and of self-knowledge. Quoting Juan de la Cruz, the narrator reveals ‘Vivo sin vivir en mi’ – which translated literally means ‘I live without myself’. [5] The identity of the presumed subject is discombobulated and identities are confused with one another. Ambiguity and doubt prevail. From such a perspective, the certainties of the identity of the subject and the subject of identity are envisioned and executed anew.

[1]   Juan Cruz’s I don’t know what I’m doing but I’m trying very hard. (8–16 September 2018) was shown by Matt’s Gallery, London, as part of an ongoing series of ten-day exhibitions in the downstairs of a terraced house at 92 Webster Road, London SE16 4DF  www.mattsgallery.org/artists/cruz/exhibition-4.php

Juliet Steyn is a cultural historian interested in the workings of cultural institutions in the formation of the subject and identity. Publications include ‘In the Hinterlands: Identity, Migration and Memory’. in Juliet Steyn and Nadja Stamselberg, eds, Breaching Borders: Art Migrants and the Metaphor of Waste (2014); and ‘The Blind Spots of Representation: The Difficulty of Reading’, in Zeena Feldman, ed, Art and the Politics of Visibility: Contesting the Global, Local and the In-Between (2017).