Introduction to Bulgarian Contemporary Art 1982–2015 is an important addition to the literature of contemporary art in that it fills a lamentable gap in our understanding of the contribution of artists from Bulgaria to the global art scene. Not only is it published in English, making this work accessible to an international audience for the first time, but it is also richly illustrated throughout, in both colour and black and white, providing never-before-seen images of a scene that was previously unknown to the majority of scholars outside of Bulgaria. Nozharova writes that ‘this book is meant for art lovers who would like to know more. It also aims at an international audience that may be familiar with a few Bulgarian artists but knows little about the Bulgarian art scene and even less about its context’ (p 6), and the book definitely fulfils such an ambition.

Nozharova points to perhaps part of the reason for this gap, stating that ‘the history of contemporary art in Bulgaria can be read as a history of deficits’ (p 6). She cites the lack of a local infrastructure for experimental activity and no Bulgarian presence at the Venice Biennale for many years, and thus little or no international exposure. Her book, however, presents an interesting story of success: a history of a number of artists, critics and institutions producing a significant body of work despite the odds – or perhaps in spite of them.

The book is comprised of the texts of four lectures delivered by Nozharova in 2012 as part of the Introduction to Contemporary Art programme at the Open Arts Foundation, a contemporary arts platform founded in 2007 in Plovdiv, by Katrin and Vesselina Sarievi. It begins when experiments in Bulgarian art began, in 1982. The first chapter, ‘Contemporary Art in Bulgaria until the end of the 1980s’, focuses on the beginnings of experimental art practices in the country in that decade. It might be wondered whether there was any avant-garde activity before that which has yet to be discovered, but that question remains unanswered in this book. There are very few examples of national histories in east-central Europe that do not include experimental practice prior to the 1980s – the only other country that comes to mind is Albania. This absence of ‘contemporary art’ in Bulgaria is explained by a quotation from the artist Nedko Solakov:

The dumb thing about our system was that there was a relative degree of freedom (for example, the toleration of ‘abstraction’ – the quotes aren’t coincidental) and you could do almost anything as long as it wasn’t directly targeted against the system… And it so happened that the absence of pressure of the kind they had in the Soviet Union and other socialist countries, also led to the absence of a Bulgarian underground’ (p 12)

This notion ignores the rich countercultural histories of experimental art in places such as Yugoslavia and Poland, where, similarly, ‘you could do almost anything as long as it wasn’t directly targeted against the system’. While perhaps this issue goes beyond the scope of Nozharova’s text, it still leaves the very perplexing question of a lack of a Bulgarian avant-garde prior to the 1980s unaddressed.

Nozharova’s first chapter draws out a number of parallels between the origin and development of experimental art practices in Bulgaria and elsewhere, both in eastern Europe and in the West. For example, early experimentation came in the form of land art and happenings, for various reasons. The outdoors, and actions with the body, which could take place anywhere and didn’t necessarily need an official gallery space in which to occur, benefitted from less surveillance and scrutiny than an official exhibition in an official gallery. Nozharova cites Bulgaria’s first example of experimental art as Vesselin Dimov’s Water Dragon, a land art installation made of wood, ropes and paint installed in the Veleka River in the remote village of Kosti in the eastern part of the country, as part of a wood sculpture symposium. Dimov had a background in mathematics and was familiar with constructivism, and many of his works resemble spatial experiments and even design. This context is not surprising; throughout eastern Europe, more leeway was given to artists working in the area of design, because there was no requirement for realism or naturalism in the work – which there would have been with traditional sculpture. 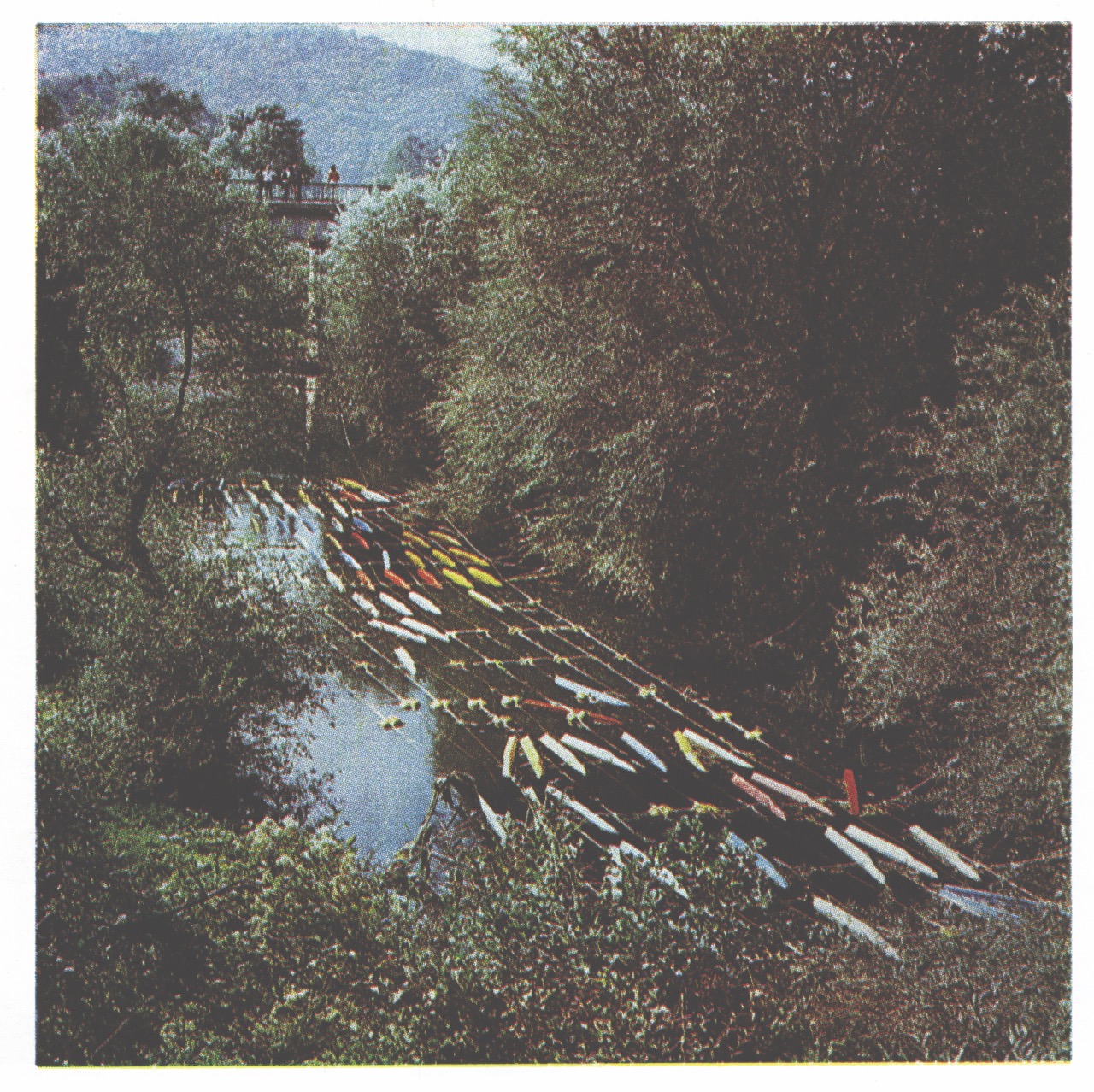 Nozharova describes this early contemporary art activity as encompassing experimentation, as well as ‘an informal approach, improvisation, joyful communication and collective action’ (p 10), a pattern that we can recognise across the region. The concept of ‘joyful communication’ is an interesting one, and recalls a similar characterisation of Slovak performance art by art historian Andrea Batorova. [1]  While this may seem surprising in countries that had just emerged from totalitarianism and where artists were still under strict governmental control, it should not be. Firstly, experimental art offered a ‘way out’ for artists whose only other option was to create state-endorsed, ideologically motivated artwork or bland abstraction. It makes sense, then, that this work would reflect the joy of the relative freedom it offered. Secondly, one should remember that the work of artists in western Europe and North America who were experimenting with conceptual and performance art was often infused with humour and play. Consider, for example, the work of John Baldessari or the origins of Allan Kaprow’s happenings in watching children play. 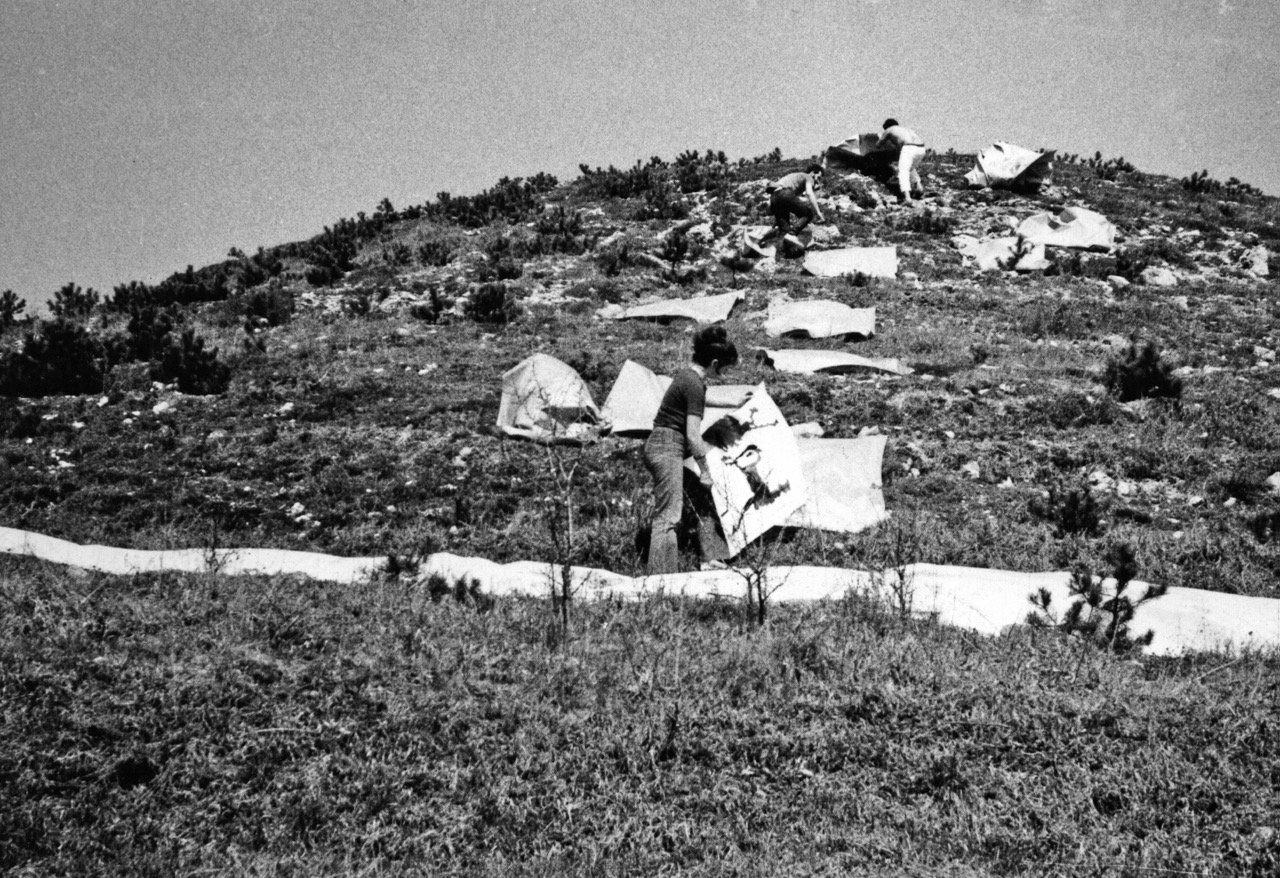 Artists in Bulgaria were conscious of not simply adopting and adapting the methods of experimentation from the West in their work. Nozharova notes how Dimitar Grozhdanov was concerned with ‘translating’ his work ‘into a language and imagery that were closer to the national artistic tradition’ (p 25). This is an aspect of contemporary Bulgarian art that could have been explored further in the book, to create a greater understanding of what was unique about the contributions of artists from this region to the development of contemporary art.

Among the book’s many strengths is that it is not simply a history of artworks and artists; rather, it tells the story of the development of contemporary art through a vast range of characters, animate and inanimate, including curators, art historians, institutions (both formal and informal, official and unofficial), galleries, exhibitions, events and other such phenomena that participated in this history. Interwoven through this history are descriptions and analyses of key artworks and their significance.

Another important contribution that the publication makes is Nozharova’s considered discussion of terminology, noting how rather than using ‘experimental’ or ‘avant-garde’, artists made a deliberate choice, in their discussions in the 1980s, to use the term ‘unconventional’ for their experiments. Across the Eastern Bloc, artists and art historians have used varying terms, either contemporaneously or posthumously, to describe the artistic activity that did not conform to the state-endorsed approach to art-making, which was usually quite traditional, naturalistic and ideological. 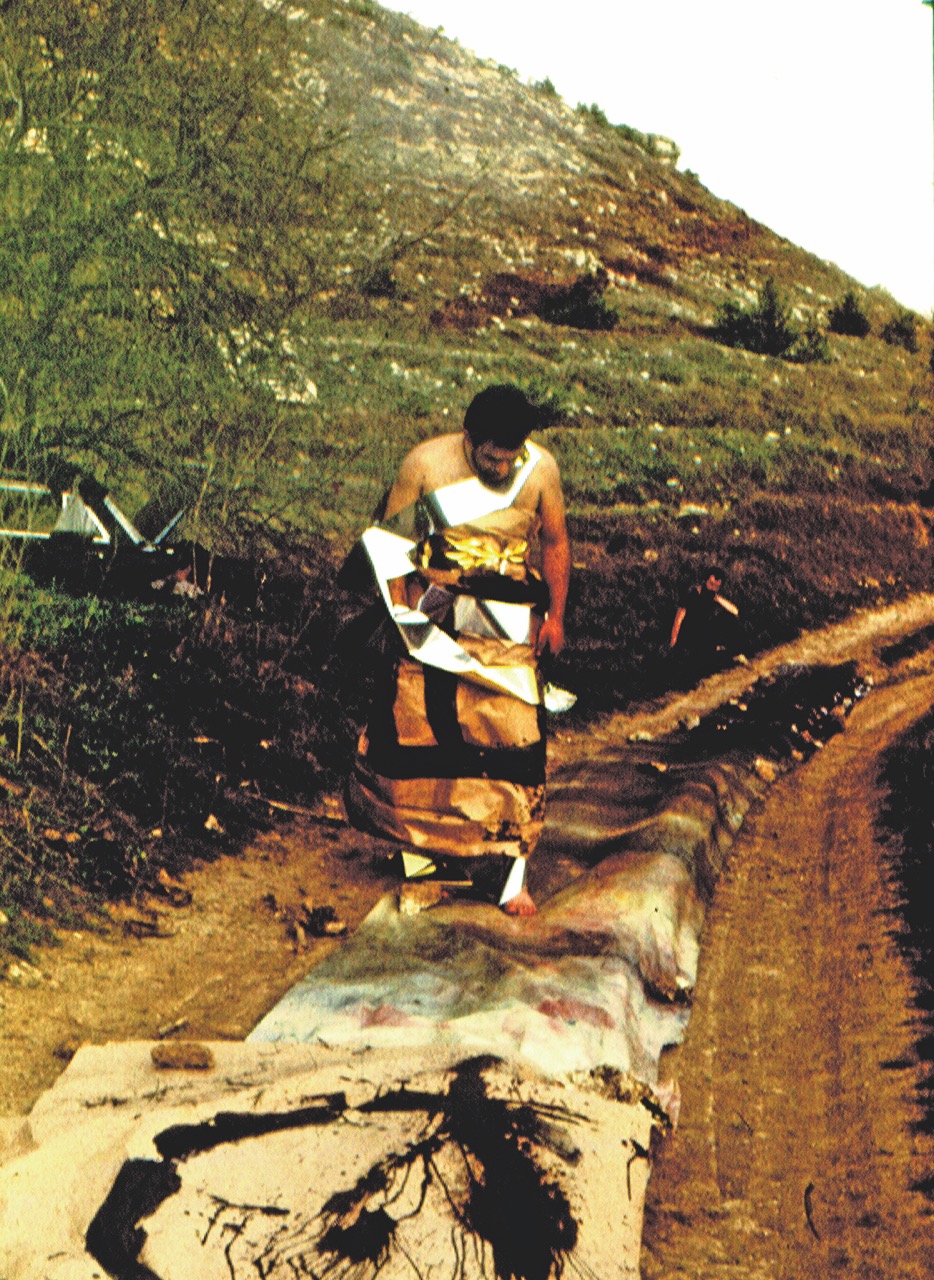 Chapter two is focused on the first half of the 1990s, a time marked by significant change and a coming to grips with the new access to the Western art world. Like elsewhere in the Eastern Bloc, artists had to navigate new systems and unwritten codes in order to succeed – in many instances, networking, a command of English and strong presentation skills mattered more than artistic skill or talent, which was a new phenomenon for artists who were used to working in closed circles and presenting work to the initiated. Among the more interesting pieces of history is a unique collaboration between artists and medicine. Galentin Gatev was a specialist in sexually transmitted diseases (STDs) from Botevgrad who developed an interest in unconventional art and amassed a collection of it in the 1980s. In 1994, he curated the exhibition ‘Dermatology? Art’ in the Dermatology Clinic of the Medical Academy in Sofia. Gatev invited artists to make works of art reacting to the unconventional setting and to create site-specific works for the space. This is just one of the many examples of the unconventional spaces in the socialist Eastern Bloc where developments in contemporary art took place.

The second half of the 1990s is the focus of chapter three. Nozharova discusses the turbulent end of the decade and the developments in art that happened in spite of a total economic collapse in the country in 1996–1997. The author includes an extensive discussion of the annual exhibitions that were put on by the Soros Centre for the Arts. These centres were set up across eastern Europe with a particular ideological agenda: to support, promote and develop contemporary art in each country, at a time when local governments were unable to. Their annual exhibitions offer an archival glimpse into the artistic activity that was taking place in the country at the time. This was also the time when local artists and art historians set up the Institute of Contemporary Art, ICA-Sofia, with the aim of not only supporting and developing contemporary art in Bulgaria, but also to create a context for contemporary art in the country and to develop and maintain connections with the international art world. This chapter also extends the discussion to artistic activity across the country, notably in the cities of Varna and Plovdiv, acknowledging the significant artistic activity that was taking place away from the capital. Overall, this chapter tells the unique story of Bulgarian art as viewed from within its borders, looking beyond them and from the perspective of others looking in – as part of both the relatively new regional designations of eastern Europe and the Balkans.

The fourth and final chapter, ‘Contemporary Bulgarian Art after 2000’, introduces the first post-communist generation, whose aims for contemporary art were different than their predecessors. Rather than finding a language and expression in contemporary art, as their counterparts had in the 1980s, these artists were concerned with the lack of context for their work in Bulgaria and the absence of an international presence. This resulted in a concerted effort to create that context at home, by developing new spaces and collections of contemporary art, combined with international representation at biennales and festivals abroad.

Perhaps one of the reasons that so little is known about contemporary Bulgarian art outside the region is because it is a complex history of artists, art works, events, institutions, curatorial activity and international exchange that all took place at a dynamic socio-political moment in recent history. In providing an articulate account of that history, this book is a much-needed addition to the literature of contemporary art and provides a nuanced view of the artistic scene in Bulgaria from the 1980s until the present. While it is good that the book is available in English, it is a pity that it does not (yet) have a distributor in the UK or North America; this would make access to this lesser-studied material even easier for scholars. Nozharova’s insight comes not only from archival research and interviews with artists, but also from her own firsthand experience of some of these events. She acknowledges the bias that may come with this experience, but in my view this is what makes her text unique as it provides an immediate view of a time and place that most do not have any access to. The book is a resource that will be of benefit to scholars for years to come.

[1]   See Andrea Bátorová, The Art of Contestation: Performative Practices in the 1960s and 1970s in Slovakia, Comenius University, Bratislava, 2019

Amy Bryzgel is Personal Chair in Film and Visual Culture at the University of Aberdeen. Her research is focused on performance art in east-central Europe. She is the author of numerous articles and three books on the subject, including Performance Art in Eastern Europe since 1960, published in 2017 by Manchester University Press.