Home > Online > On Brexit in Vienna: Mirroring the Social Decay

On Brexit in Vienna: Mirroring the Social Decay

Ivan Jurica reviews the exhibition ‘Lost in Europe: In the wake of Britain's inner emigration’ at Open Space, Vienna, 19 October – 9 November 2018. The exhibition was organised in connection with the special double issue of Third Text, no 154-155, with the same title, edited by Richard Appignanesi

In the latter part of 2018, Open Space in Vienna hosted a rather timely, intriguing group exhibition, ‘Lost in Europe: In the wake of Britain’s inner emigration’. Upon entering the exhibition space, one’s gaze was first caught by a wooden box with its many small square compartments, like a typesetter’s box of fonts filled with a diversity of small curio objects. It looked rather like a kitchen assembly with its domestic jumble of spices, postcards, notices and reminders. Such private topographies might immediately be familiar to many, but closer inspection of Haim Bresheeth and Yosefa Loshitzky’s Memory Box: The Last Honeymoon in Europe (work in progress, 2018) offered clues of some paradigmatic symbols that convey a collective narration/history, while the rest might remain a puzzle for the uninitiated. Following the path of their parents to Israel after surviving World War II and the Holocaust, Bresheeth and Loshitzky have created a video narrative of their own retrospective expedition that occupied their ‘last honeymoon in Europe’. A picture emerges of complex individual histories, ‘a whole pack of experiences and emotions’, as Richard Appignanesi, one of the exhibition curators, pointed out. A poster of the artists’ statement reads: ‘I am and I am not European. I am and I am not Jewish. I am and I am not Israeli’. The poignancy of this ambiguity set the tone of the exhibition. With ‘Lost in Europe: In the wake of Britain’s inner emigration’, the curators, London-based Richard Appignanesi and on-site curator Gülsen Bal, elaborated Brexit as a conundrum of Europe’s, or, to be more precise, the EU’s traumatic situation. The paradox of ‘British and not British’, of ‘European and not European’, separates and at the same time traps both protagonists in their traumatic compartments. The introductory text to the exhibition stated that such a project did not aim primarily to rehearse pro- or contra-positions towards Brexit, but the elusive condition of what Appignanesi calls ‘Britain’s inner emigration’. The term (alluding to the history of those opposed to the Nazi regime but yet remaining in Germany) is shifted provocatively onto the current state of Europe and the UK, with an implicit suspicion of Germany’s present EU ascendancy. Brexit might also be diagnosed as an outcome of the crisis of capitalism, resulting not in a state-imposed totalitarian regime but in a democratic conclusion following the individual votes of the citizens of the UK. Where is this inner emigration leading us, Appignanesi asks? And he answers: somewhere ‘Lost in Europe’; or, it could be continued, lost somewhere in Britain. Thinking Brexit means to think the EU. Brexit only mirrors the EU’s failures and ambitions.

But there is also the USA – or, rather, Donald Trump, the ‘truly’ US-American triumphal revivalist, the embodiment of a populist, rust-belt resentment, an ingrown white paranoia that seeks to ignore the world in its will to ‘make America great again’. ‘Trumpism’ is a parallel form of inner emigration – in this case, however, harbouring an imperialist nostalgia for the US’s continuance of its global game of Manifest Destiny. Trump’s dream of constructing his own grandiose ‘Hadrian’s Wall’ across the US/Mexican border, which perfectly represents that agenda, is the target of Bruce Barber’s Party Without Party (variable projection, 2017), based as it is on the historically weighty ‘detourned’ Surrealist Map of the World from 1929 that carried with it that era’s freight of anti-colonialism. 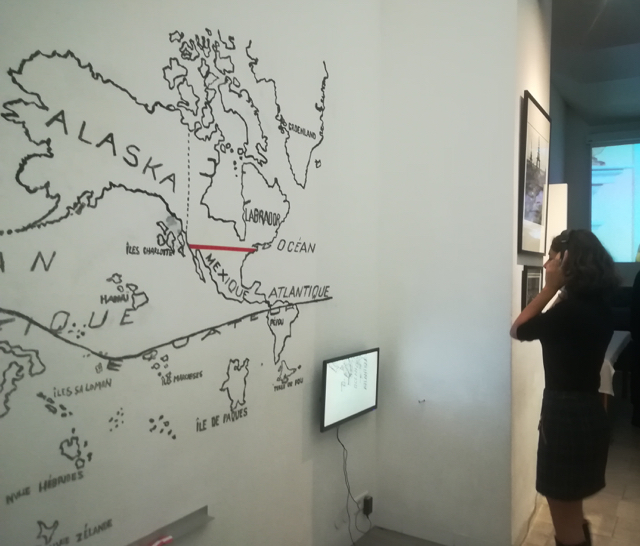 Trump enjoys the dubious distinction of being the only politician awarded figurative representation in this exhibition. In Diptych: La Familia $rump & The President That We Deserve (C-type prints, 2017), Gregory Sholette inserts the current president and other members of ‘La Familia’ into known readymade images from European and American art history, an aesthetic tactic poised somewhere between baroque opulence and cold, functional reduction. Not that an image of Britain’s Prime Minister, Theresa May, dancing the two-step with the EU’s negotiator, Michel Barnier, could be seriously missed. It is just that the thought occurs: is the image of Donald Trump, in some contemporary Warholian manner, being transformed into the next pop-icon? Or is he already one – at the centre of our grotesquely fascinated attention, a single obvious target blurring an entire system and its other deadly villains? The American president has been the subject of intense debate among a small circle of artists, curators and theoreticians I know. Recently, in the context of a private discussion in Berlin, one of them stated: ‘It is not about Trump, because when one doesn’t try to get rich, one will stay poor. It is about an entire system and the mentalities that bring people to vote for Donald Trump.’

The Austrian situation does not offer anything better. It was the then Austrian conservative right-wing government that, at the beginning of the twenty-first century, broke with the post-war taboo against right-wing parties executing power over the state agenda. This was a shock, and was followed by harsh sanctions being imposed by the other EU countries. But this already seems a long time ago. The gratis campaign buttons, with the inscription ‘Partei ohne Partei’ (Party Without, or of, No Party) and bearing the Austrian red-white-red flag, were Bruce Barber’s ironic comment that formed an integrated element of his installation, at least for now, but which will be probably be exchanged for another ‘motto’ when shown in some other country. One might think here of the young Polish pro-European intellectuals who do not see the future of Europe and of Poland within the traditional system of political parties and elections. So therefore, in such terms, what is the future of ‘no party’ politics? To be honest, I don’t remember anymore the conclusion of their statement. But what I do remember is an apocalyptic picture of London in the exhibition, a half-tone drypoint situated somewhere between sci-fi aesthetics and Fritz Lang, in Raphael Appignanesi’s London Waiting (2018). Raphael Appignanesi’s apocalyptic scenery resembles statements often heard from people of very different backgrounds and in a state of political desperation: ‘Just get rid of those scumbags and we can start from the root, from the beginning all over again.’

Maybe the real tragedy of Brexit is its agenda of solely being against the EU, of how to get rid of it and run the national agenda of the country independently. One is left more with the feeling of self-interest, of closure, leaking through, with no thought of how to share and distribute the national wealth more equitably for all. Brexit is a dilemma, and a trauma. With some dry humour, Amikam Toren cuts a ‘no place like home’ caption into his found landscape painting Armchair Painting: No Place Like Home (2016). What is ‘home’ for an Israeli artist, living in London, exhibiting in Europe? Europe’s classic theme of ‘homecoming’: what will become of that? The consequences of Brexit will be far reaching, affecting all fields, all social structures, including the UK’s fine arts scene and production too. The outcome might be twofold: on the one hand, a further transformation of art into commodity; on the other, a radicalisation of anti-capitalist, anti-fascist and anti-racist positions and forms of resistance. ‘Lost in Europe: In the wake of Britain’s inner emigration’ subtly confronted us with that.

Ivan Jurica was born in Bratislava, Slovakia, and lives and works in Vienna and Bratislava. He graduated from the Academy of Fine Arts, Vienna, and currently works at MUMOK (Museum Moderner Kunst Stiftung Ludwig Wien) in the art education department. His work focuses on video, theory and politics, and on relationships within processes of production.