Home > Online > BOOK REVIEW: Translating the World into Being - A review of ‘At Home in the World: The Art and Life of Gulammohammed Sheikh’

BOOK REVIEW: Translating the World into Being - A review of ‘At Home in the World: The Art and Life of Gulammohammed Sheikh’

At Home in the World is a major accomplishment. It is the first comprehensive study of the art and life of Gulammohammed Sheikh (b 1937), a seminal figure in the art of post-Independence India, whose five-decade-long career as an artist, teacher, poet, publisher, researcher and curator belies a lifetime of art historical learning. In the spirit of the phenomenon of the ‘artist’s artist’, one who uniquely garners the respect of their peers, Sheikh might be seen as an ‘art historian’s artist’ because of the intellectual threads that spin out of his work and that challenge the historian’s imagination and chronologies. Emerging from a humble, Muslim background in a small town in colonial Gujarat, Sheikh was ten years old in 1947 when India achieved Independence from British rule and the subcontinent was partitioned into two new nation-states. The volume articulates the significance of this emergence to Sheikh’s hybrid and pluralistic practice of art, and traces the consequential journey that will follow: his formative move to attend art school in Baroda in 1955 at the age of eighteen; his subsequent travels to England and Europe; his involvement in ‘Group 1890’, the radical artist collective led by J Swaminathan (1928–1994) – which Sheikh later described as a ‘meeting of mavericks’ [1] – and his three decades of teaching art history and practice at the Maharaja Sayajirao University of Baroda (1960–1993). The volume posits Sheikh’s relentlessly syncretic work, which is often informed by historical images and iconic symbols from various medieval, modern, Indo-Persian and Judeo-Christian myths and traditions, as an ongoing endeavour at ‘translating the world into being’, [2] a phrase that serves as the title of the Prologue (and the title of this review). The result, as this study establishes definitively, is a body of work produced over a half century premised, in both formal and compositional terms, on radical diversity, a plurality of temporal coordinates and a passion for narrative and the plenitude of life.

Chaitanya Sambrani, the Australia-based art historian, has edited the volume and also contributes five chapters to its title section ‘At Home in the World’ that blend art history, biography and visual analyses to establish the core narrative of the book. Sambrani’s involvement reflects the impassioned commitment of his earlier two-part film project, To Let The World In (2013), a documentary about the history of contemporary Indian art from the early 1980s to 2012, in which Sheikh also figured as a protagonist. In these chapters, Sambrani wears his extensive knowledge of Sheikh’s art and life lightly, based as it is in three decades of friendship and tutelage, and he writes with careful attention to detail about the living subject of his study. He further conveys that Sheikh himself was centrally involved in producing the book, and the presence of the artist can be felt in the form of images, anecdotes, information, editing, design and layout. This not only adds to the depth of engagement and meticulousness of the volume, it also transforms its status into something of a collaboration with, and therefore an extension of, Sheikh’s artistic practice. Three additional essays – by scholars Cóilín Parsons, Marcia Kupfer and Karin Zitzewitz, with expertise in postcolonial literature, western medieval art and modern and contemporary South Asian art, respectively – focus on specific projects by Sheikh, in particular his later works. Here, the different disciplinary orientations and areas of specialty represented by the contributors serves to further animate the multi-perspectivalism that is at the heart of Sheikh’s prodigious practice.

In his contribution to the text, Sambrani constructs a luminous account of Sheikh’s life and career from his small-town beginnings in Surendranagar in northwestern Gujarat, to the cosmopolitan life worlds opened up by his art education in Baroda, to the ‘modernist adventures’ that would ultimately ensue. Sambrani contends that the ‘either-or’ tensions that structure the binaries between Indianness and foreignness, or Hindu and Muslim, for example, are anathema to Sheikh, who insists instead on a ‘both-and’ model, a powerful basis for his imaginative activities. It is appropriate, then, that Sambrani embraces a ‘both-and’ approach in his own analysis of the rich array of cultural and intellectual encounters that come to inform Sheikh’s creative pursuits, and he attends to his activities as a writer, teacher and poet alongside the shifts in his practices of painting. Interestingly, Sambrani shows how the repeated ‘naturalist’ motifs of the tree and the horse that appear in Sheikh’s earliest paintings from the 1960s gradually give way to the symbols of the wall and the doorway which are ‘anchored in history’ and contested public space. Here, he identifies the painting, Returning Home after Long Absence (1969–73), which features the artist’s mother alongside elements of Islamic iconography and formats borrowed from Persian miniature painting for the first time, as emblematic, in Sambrani’s terms, of a ‘summation of his concerns during the later 1960’s and early 70’s, while pointing forward to the canvases of the next two decades’. [3] What is significant about these new directions, according to Sambrani, is the artist’s increasingly ‘kaleidoscopic structure’ for rendering the parameters of space and time, for it is precisely this kind of imaginative vision that will serve to undermine ‘the sense of boundedness and historical closure that a nationalist modernism implies’. [4] Elsewhere in the volume, Sambrani identifies and analyses other major themes in Sheikh’s oeuvre, from the ‘nervous dynamism’ of his human figures, exemplified in the painting, City for Sale (1981–84); to the arboreal yet postmodern encyclopedic impulse that culminates in his massive 1996 mural, Tree of Life, in Bhopal; to the mysterious figure of the fifteenth century poet and mystic, Kabir, who prevails in the series, Kahat Kabir (1996–2002), and comes to preoccupy Sheikh’s work into the 2010s. 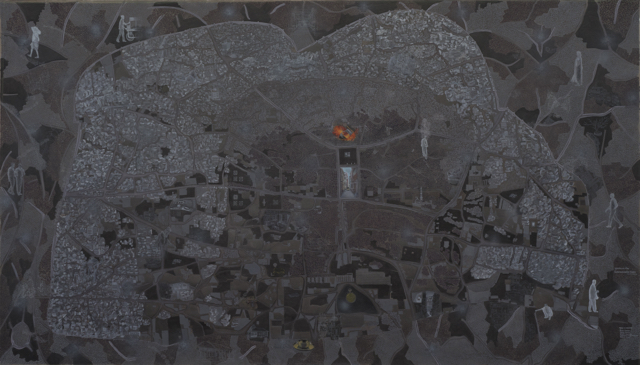 Gulammohammed Sheikh, Ahmedabad: The City Gandhi Left Behind, 2015–16, casein and pigment on canvas, 203 x 353 cm, courtesy of the artist

In her essay, by contrast, Marcia Kupfer, a historian of western medieval art, focuses on Sheikh’s relation to the cartographic tradition of the European medieval map, and his interest in the ‘lost’ Ebstorf map, which dates to 1300, in particular. Sheikh first encountered the latter in a book of postcards he purchased in the British Library shop in London. Highlighting the dynamic play between original and copy, Kupfer shows how Sheikh’s computer-generated, minutely painted and collage-like appropriations of this pre-modern map serve to further destabilise an already unstable ‘source’ and which was itself subjected to endless mediation as an artefact. Here, the term ‘appropriation’ seems inadequate for grasping the nuance and sophistication of the contemporary artist’s gestures of borrowing, but Kupfer is clearly cognisant of this problem. Ultimately, she argues that Sheikh’s ‘medievalism’ (ie his turn to the cartographic conceit of the medieval map) is not nostalgic but forward looking. ‘For he (Sheikh) not merely excerpts and remixes selected elements’, she explains, ‘but also intervenes in our reception of the appropriated traditions.’ [5]

Sheikh’s Mappamundi Suite (2003– ), a series of works on paper produced through a process of digital collage, is the subject of Cóilín Parsons’s essay, reprinted from 2014. He, too, highlights the multilayered and polysemic status of the European medieval map, and the resonance of this formal selection by the artist. A scholar of postcolonial literature, Parsons likens Sheikh’s engagements with these archaic formats to Amitav Ghosh’s similar investigations of the medieval archive in his 1994 novel, In an Antique Land. Both artist and writer, Parsons argues, turn to a period centuries before European colonialism ‘as a model for a world in which human interactions in the Indian and Muslim worlds are as yet unsullied by the discriminations of race and nation’. [6] His essay thus seeks to identify an explicitly postcolonial politics in the artist’s vision: Sheikh’s kaleidoscopic digital maps, he states, ‘provide a template for trying to imagine a world without the inescapably modern violence of ethnic nationalism’. [7] As such, they express ‘a forceful dissent from the politics of sectarian violence’ left in the wake of British imperialism in India, and stake out a space for pluralism in a world of ethnic hostility. [8] 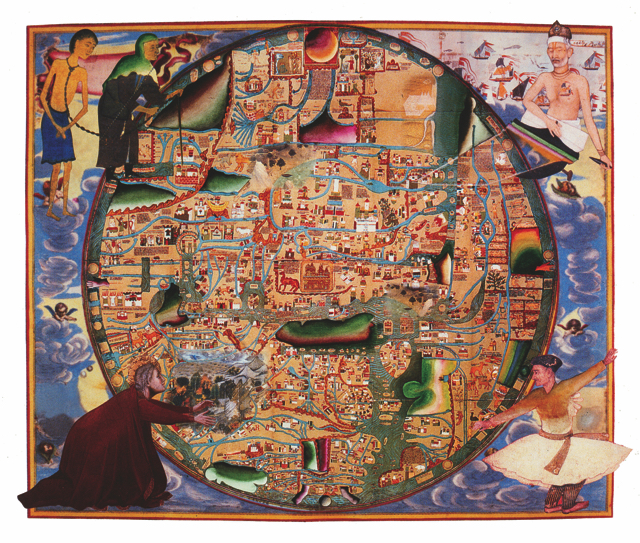 Finally, Karin Zitzewitz addresses the inclusion of new and flexible forms into Sheikh’s aesthetic repertoire in the past decade and a half, most notably the accordion book and the kaavad, or wooden shrine, and the use of digital media. The structure of the kavaad is less linear than the accordion book, she observes, allowing Sheikh to indulge in non-chronological, three-dimensional narratives that multiply points of entry and exit. Zitzewitz further highlights the significance of Sheikh’s deft manipulations of scale in such projects as the kavaad series, which range from small wooden boxes to room-size panels that a visitor can enter and walk in and around. These most recent works by Sheikh, she contends, ‘directly cite his earlier paintings and return to an archive of art historical references accumulated by the artist over decades. But they also articulate aspects of his thinking about temporality and cultural history in new, politically provocative, ways.’ [9] This shift in the ‘sharpness’ of his vision, according to Zitzewitz, is linked (as Parson also implies) to the transformations to political discourse in his home state of Gujarat since the devastating riots of 2002. The profound significance of the artist’s vision of an alternative, anti-communal, pluralistic and co-existing national space hardly needs to be highlighted, given the continued rise of right-wing politics, anti-democratic forces, and authoritarian leadership that reign in India today.

Visually, this is an exquisite book, unsparing in its richness of colour, extensive documentation, surprise foldouts, and abundance of close-ups and details, which invite intimacy, fresh perspectives and modes of contemplative looking. It is also a hefty volume: weighing in at almost five hundred pages and several kilos (according to the post office), it represents another major addition to a series of impressive volumes concerned with contemporary Indian art produced by the relatively small independent publisher, Tulika Books, based in New Delhi. Substantial in both breadth and beauty, simultaneously sensuous and deeply informative, this book will inspire – and lay important groundwork for – the future scholarship on Sheikh that is yet to come.

At Home in the World: The Art and Life of Gulammohammed Sheikh, edited by Chaitanya Sambrani, is published by Tulika Books in association with Vadehra Art Gallery, New Delhi, 2019
480 pp, ISBN 9788193926901

Saloni Mathur is Professor of Art History at the University of California, Los Angeles and an Editor at the journal ARTMargins. She is author, editor and co-editor of five books, most recently A Fragile Inheritance: Radical Stakes in Contemporary Indian Art (Duke University Press, 2019).