Home > Online > In conversation with Adam Pendleton: What is Black Dada?

In conversation with Adam Pendleton: What is Black Dada?

Awa Konaté on the work of Adam Pendleton and Black Dada:

‘Black Dada is an artistic sequence of variations which intersect, yet does not conform to one’s preconceived definitions and therefore is articulated into newer or non-restrictive meanings’, Pendleton has stated.

James Baldwin once said, ‘we used to think of history as the realm of the settled as an inalterable past, as a nightmare. That was the legacy bequeathed us by the past century’s catastrophes. But while we can never redeem what has been lost, versions of the past are forever being reconstructed in our fabrication of the present.’ [1]  Although Baldwin enumerated these words in 1972, today’s volatile political moments and relations reminds us that the past is repeatedly embedded, and evermore so, in our present sphere. Baldwin comments on the interrelations between past and present realities as a continuum of cultural and historical notions that constitute the very materiality of our social fabric as ever persistent, suggesting the past is never past but an ongoing rupture in the present.

Adam Pendleton is an artist whose unwinnable and complex layered practice is exceptionally occupied with Baldwin’s declarative statement. With a career spanning nearly two decades, Pendleton has situated the intersections of race, belonging, cultural politics and art history as varying constructions that are rearticulated and imposed in the very centre of our ‘Contemporary’ – not merely in order to inquire ‘how’ and ‘what if’ but to push the very logic that constitutes their historical and social functions.

My first encounter with Adam Pendleton was his large ‘Black Lives’ banner at the Venice Biennale’s Belgian pavilion in 2015. [2]  The context was stupendous, the banner’s dominating and large scaled presence appeared to almost ‘devour’ the white cubed pavilion by forcing the centrality of its race relations. Accounting for the discrepancies of labour value – one that welcomes that of artists whose works are inherently political – in juxtaposition to the perceived value of the menial labourers who uphold the institution’s function and arguably its existence, the dichotomy of the two undoubtedly compounded the racialised labour inequalities, something that has yet to gain momentum in conversations about the art world’s many precarities. Shortly after, my attention was directed to the disruptive continuity of Pendleton’s work whilst reading his publication Black Dada Reader from 2017, [3] and subsequently I had the opportunity to engage in a brief yet thoughtful exchange with him about his artistry and the contextualisation of Black Dada. 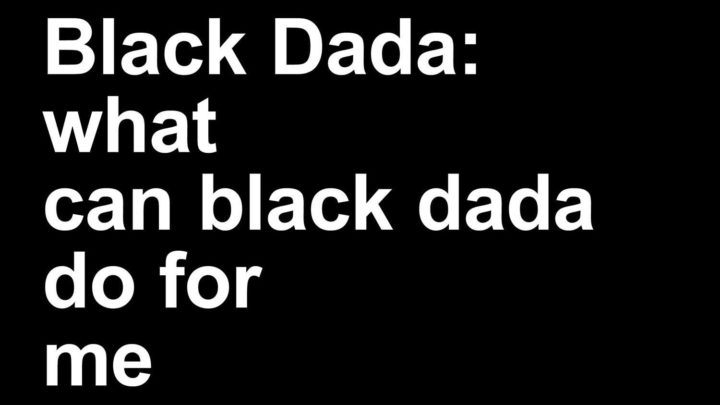 ‘Black Dada is an artistic sequence of variations which intersect, yet does not conform to one’s preconceived definitions and therefore is articulated into newer or non-restrictive meanings’, Pendleton has stated. Drawing inspiration from the American beat poet Amiri Baraka’s composition Black Dada Nihilimus (1964), [4]  Pendleton developed a practice framework called Black Dada in 2008. It is a manifestation that the artist referred to as a theoretical amalgamation, which intersects Harlem’s avant garde art movements and Conceptualist references from the 1960s to 1970s, remarking during our conversation that ‘Black Dada is a way to talk about the future while talking about the past. It is our present moment.’ [5] In a comment on the present’s continuity, Pendleton reflects: ‘what can I as an artist do which would critically reshift that which matters and affects me personally?’ [6]

With an expanded socio-political idea theoretically and conceptually embedded into his work, one observes and is reminded that Pendleton’s art does not merely exist along this idea but is the very foundation and function through which his practice and the various discourses as well as dialogues it sustains are comprehended. In this sense, the theoretical framework of Black Dada is an ontological conceptualisation of Blackness. This will not necessarily be noticed when reading the Black Dada Reader, however. Instead, as a spectator, I understood the concept in actual physical proximity in Pendleton’s ‘Our Ideas’ exhibition at London’s Pace Gallery in 2018. [7]  Upon entering the space, one’s attention was immediately overwhelmed by the evident dialogue between the space and the art. As one gazed longingly at and simultaneously felt tempted to touch the glossy and tantalising surfaces of the silk-screened canvases, their ephemerality appeared to cut sharply through the architectural frame of the exhibition room. This was particularly notable in the work Our Ideas #2, in which too much seemed to be visually going on at once, yet the rigidity of its black/white chromatic scale aided in strengthening the space’s dynamic tension between idea and materiality. Navigating from the entrance towards the gallery on the left and then the right side, the various archival photographs of decolonisation movements that featured in Okwui Enwezor’s ‘The Short Century’ exhibition at Villa Stück in Munich in 2002 were appropriated, transfiguring an entire space into literal graphic emblems. In a further transfiguration, incomplete sentences from various texts were spray-painted, drawn or printed on the photographic surfaces, to continuously remove and distort their original context. In attempting to deconstruct this, the intrinsic function of isolation and disruption, whether separately or together, could be said to be drifting towards a critique of the relation that the intersection of image, spoken and written word constitute. 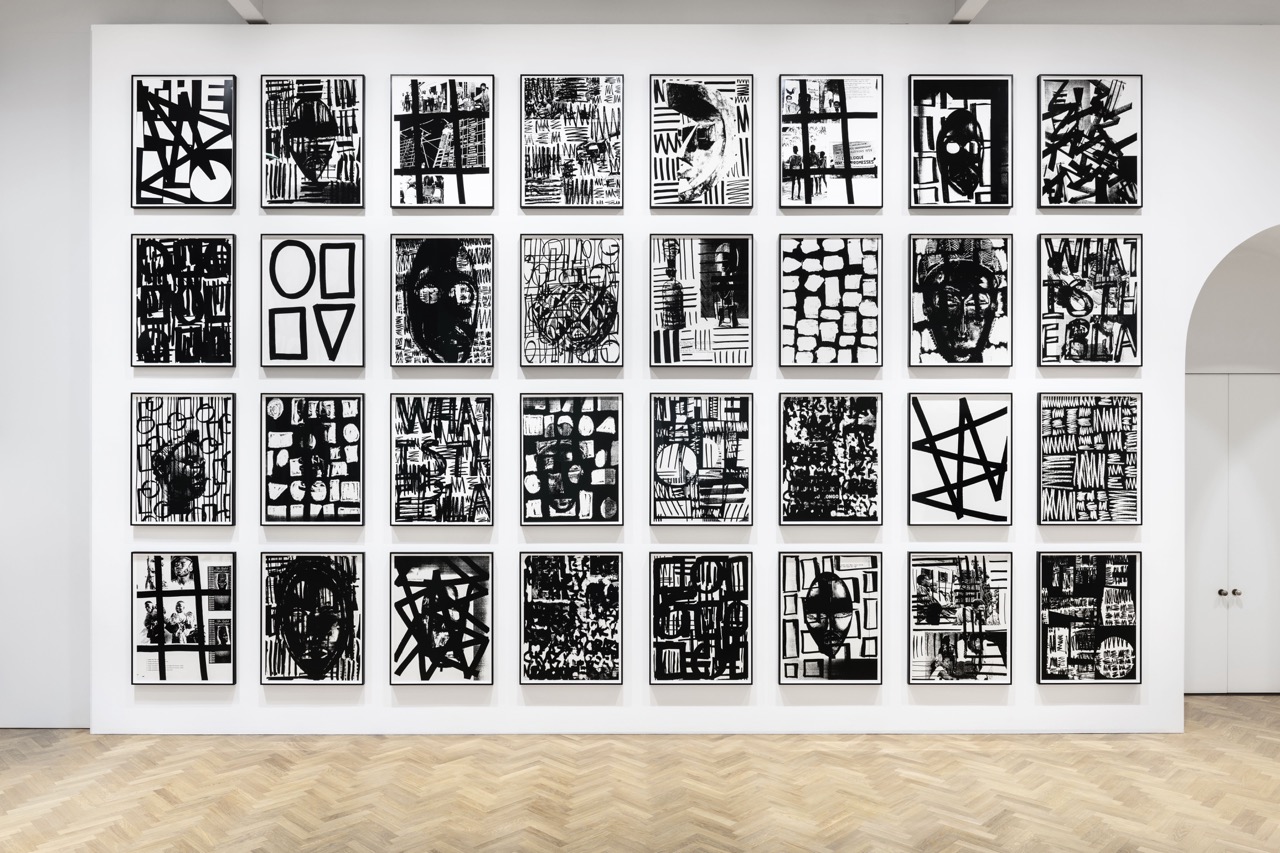 These functions were continuously reiterated in the exhibition and although they often appeared incomprehensible, they nevertheless stayed true to Dadaism’s dynamic tension between idea and materiality. The critic Michael Fried phrased this as ‘presentness’, [8] meaning the art-object’s ability to negate the viewer's attention into nothing but an illusionary space. As the works on immediate encounter are unreadable, attention is focused instead on the external connection between them and their environment. Their ‘movement’ to one’s awareness becomes significantly more apparent and transfixing. There is an interesting dialogue at play between the theoretical framework, Black Dada and the actual work. Pendleton certainly comes from a critique of presentation, a critique that not only centres but subjectivises race as a historical, political and cultural construct that is continuously articulated through the objects, theories and works that he appropriates.

Yet interestingly, the artist, when questioned, subtly reminds that the familiarities appear to be extended beyond their origins, not as fixed periodisations but as fragmentations of different histories, which all somehow bear a resemblance and constitute the very materiality of the Black body both as colour and concept: ‘I feel as though our consciousness is the result of appropriation. We are appropriated and culture is the result of that which has become networked throughout our history into the realms of culture.’ [9]

To observe Pendleton’s work requires complying – and almost being forced to do so – with a sense of unknowingness, and observing meaning as constituted in the themes through a refusal to be categorised. The dialogues of imagery allude to history as a constituted limitation between past and present beyond the reinforced linearity of time, which when read at a micro-level slowly detects the familiarity of narratives. ‘My work, and moreover Black Dada, operates on notions of abstraction, but such abstraction is an active mode of representation, which is a liberation of its own.’ To articulate this further, Black Dada as an abstraction is therefore understood as the literal and metaphorical process through which epistemological relations are interrogated. This is reminiscent of Andrea Fraser’s institutional critique framework noting ‘other ways of seeing, experiencing and understanding’. [10]  Although the two are distinctive practices of their own, they provide a comparable attempt to not only dematerialise the material art object but also the linguistic structures that constitute its existence. Within the exhibition space, there was no written statement, titles or dimensions to isolate or occupy individual works. Instead, they appeared as a single artistic corpus. In the absence of any written information, one’s ability to read the work was contingent upon imagining, and moreover determining, the incomplete abstraction’s socio-political function, its role, and, importantly, its extension to space and identity. This is perhaps where ontology and epistemology conjoin each other, at the knowing or knowledge-ing of nothing and nothingness. 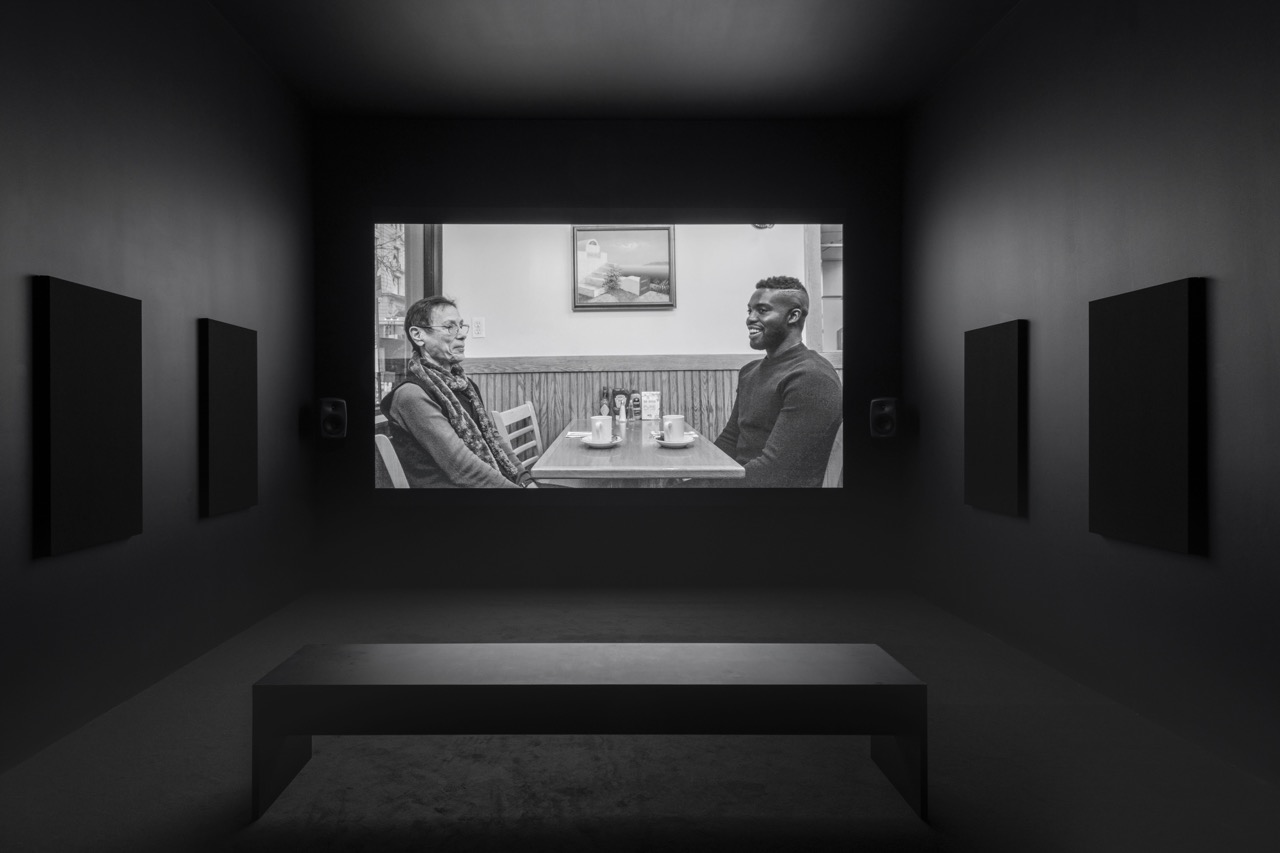 The incompletion is purposely an opening signifier intended to move in several directions. The result is a body of works in which radical juxtapositions appear incomplete and circulate to confuse and disrupt institutional logic, yet correlate periods of time, art and politics where the past continues to reconstruct itself in the present. Thus, as a viewer, one’s attention and appreciation is immediately constrained to that of the unknown when in the absence of any prior knowledge of the appropriated content. The conceptual framework of Black Dada is therefore unfathomable without material reference. But in attempting to account for Pendleton’s general practice, his reluctance to define more than is necessary is intentional in order to provoke viewers to carefully consider meaning in not only the reappropriated imagery or text but in the intersections between the space, the artworks and oneself. By maintaining an almost consistent exhibition format, which only varied in texture and positioning, one was unable to view the objects without also being mindful of the physical and temporal relationship – and by extension Black Dada – that requires a constant state of both physical and intellectual wandering.

The incomplete and disrupted linguistics bear such an important function in Pendleton’s artistry. The fragmentation of the written language appears to refute familiarities. The disconcerting feeling that is evoked through Black Dada asks that one navigate the frustration of a consistent knowing to surmise, to be reminded that history and personal experiences are often defined by contradictions, gaps and overlaps. The artist responds to this by saying: ‘My work has remained quite consistent and identifiable, particularly with an interest in language – how it functions in both a literary and a theoretical sense. By theoretical, I mean how language shapes spaces and creates discourses and how it functions and through which certain bodies are excluded. So, a consistent aspect of my work has always been the dichotomy through which the body is situated in the ephemeral frame of language and space, and importantly how that configures one’s identity and existence outside of the institution’s sustained historical narratives.’ [11] 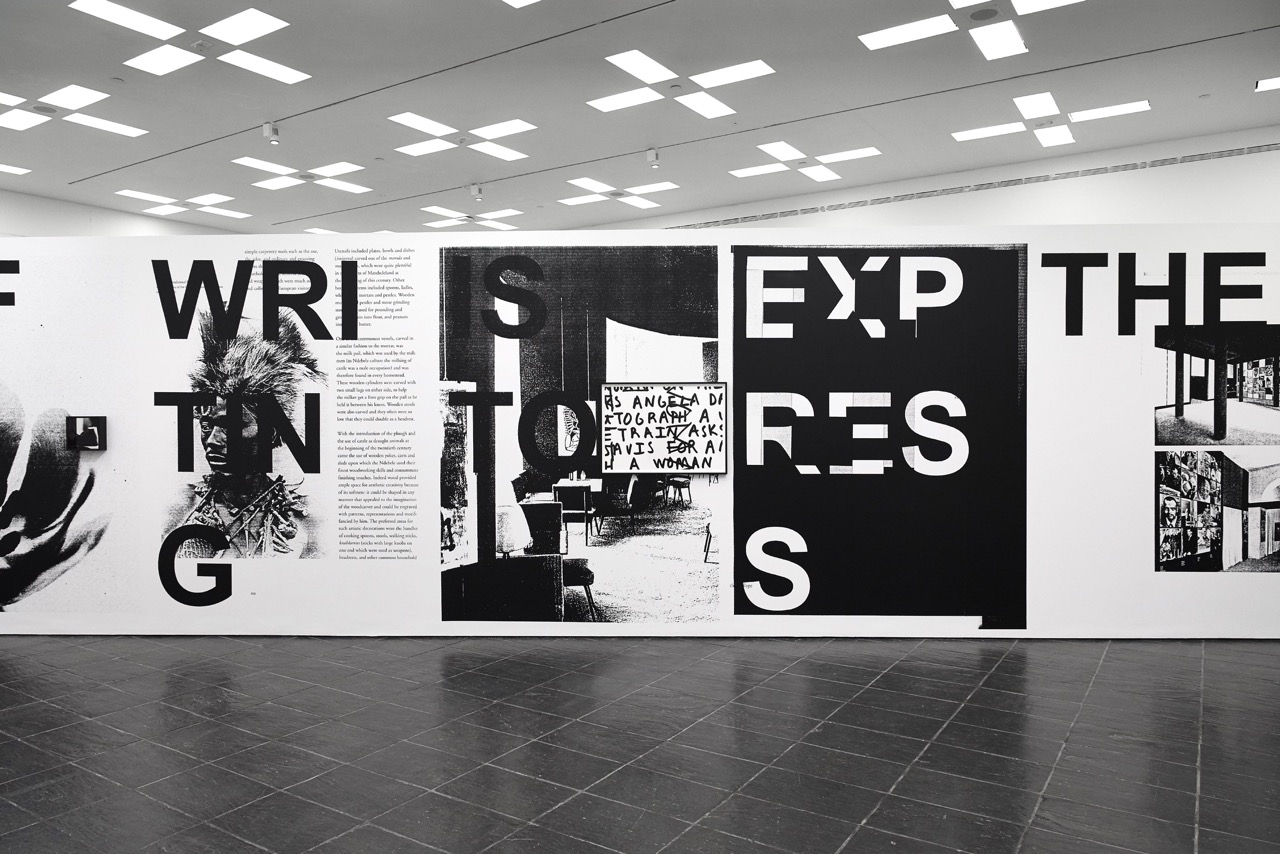 Installation view of ‘Adam Pendleton: shot him in the face’, 27 May–10 September, 2017, at the Baltic Centre for Contemporary Art, Gateshead, UK, © Adam Pendleton, courtesy of the artist and Baltic

Pierre Bourdieu referred to this process as ‘cultural allodoxia’ [12] – a misinformed recognition that distorts the gap between acknowledgement and knowledge. In his ability to merge mediums and disciplines into one, Pendleton’s essayistic practice draws us towards a larger and, in the truest sense, experimental narrative, a narrative that ruptures possibilities in reimagining abstraction to paradigm Black lives, as they are unseen in the past and ‘seen’ presently.

Perhaps this encounter or ‘rehistoricising’ seeks to interrogate past and present representation to suggest that the reappropriation of older imagery is a mark of a continuum, to observe how visual relations inform aesthetical relations that exist in the moment. In response, it could be asked, where does the Black body and its historical narrative fit in to the frame of discursive visibility? And does the unpinnable definition shift conceptions of Blackness, and furthermore the ways through which Blackness is materialised?  Black Dada leaves an unsettling and unreadable symbolism, yet it inevitably forces a perspective of the institutional space as a site of social antagonism. Perhaps its conceptual framework presents a rather profound revision of history and language, to inquire into an epistemological narrative and its intrinsic socio-political layers that, in turn, forcefully ask, ‘what do you actually see?’ [13]

Awa Konaté is a critic and curator based between London and Copenhagen. She is the founder of the interdisciplinary research initiative Culture Art Society that conjoins critical studies, contemporary art theory and archival practices to investigate the institutionalisation of Black Aesthetics.