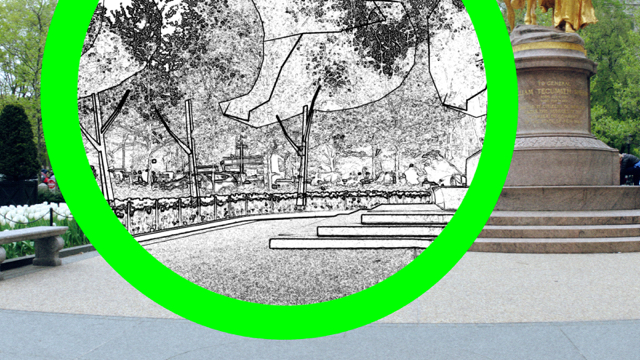 Partnerships between commerce and artists are commonplace nowadays, and it is probably not surprising that Apple launched an [AR]T event this past summer, the summer of 2019. Recalling the public outcry in 2007 when the artist Takashi Murakami redesigned a line of Louis Vuitton handbags and showed them at MOCA in Los Angeles now seems almost quaint. 1 However, Apple – a company valued at 1 trillion US dollars, with its history of privacy, proprietary software apps and killer design – signals some differences.

This [AR]T event opened simultaneously in August 2019 in the cities of San Francisco, New York, London, Paris, Hong Kong and Tokyo and will run throughout the rest of the year with a title that neatly describes its two components: augmented reality (AR) and art. Three curators from New York City’s New Museum were commissioned to select seven well-known artists, varying from installation and performance artist Nick Cave, the team of Claymation artist Nathalie Djurberg and sound artist Hans Berg, Carsten Höller, Cao Fei, Pipilotti Rist, to poet John Giorno,* and, in collaboration with Apple, each created AR versions of their work.

Readers may be familiar with AR, but, if not, it is different from Virtual Reality (VR), which usually entails a headset (covering ears and eyes) to create a completely imaginary 3D digital environment. AR differs because it actually intercedes with real life rather than replacing it. With AR, one sees objects or environments imposed onto real-life settings via a phone or tablet. So, for example, with an AR app on one’s smartphone, you can hold up the device and looking through it as if it is a camera digital objects begin to appear within the frame, surrounding, in front of, on or over the actual people and things in that space. This technology has developed rapidly over the past several years. Earlier iterations of AR consisted of a projected image onto a stationary real-life object, but with this [AR]T event, the animated objects flowed freely. By holding my phone, I discovered I could turn right or left, look up or down, and the AR objects would appear against everything and anything within the frame of the landscape.

In San Francisco, the event started with a small group of a few artists – but mostly ‘techies’ – gathered at the Apple store in Union Square, from where we were then directed to walk outside as the artworks were designed to be experienced in Yerba Buena Park, a short walk away, and a nearby street and plaza. At the start, in addition to connecting to the app on our phones, we were given earphones to listen to sounds integral to each piece. While standing in the park, as I held an iPhone, camera-like in front of me, the concrete path around the park suddenly changed into full spectrum colour. Walking forward, words from the poet John Giorno started appearing in front of me over what was now a rainbow road. Later, listening to Everyone Gets Lighter, another poem by Giorno, I pointed the phone up towards the sky, listening to his lightly accented voice while watching his spoken words form in letters above the buildings before breaking apart and drifting off. 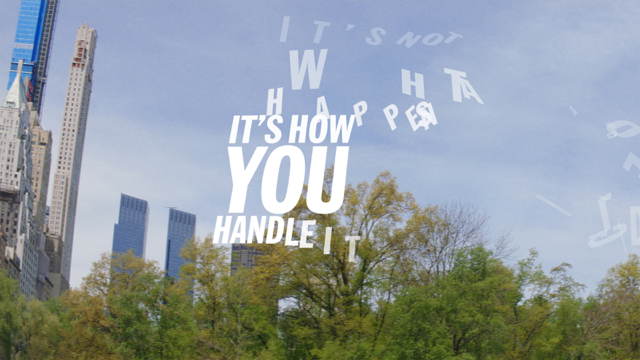 It is an interesting technology and endlessly fun. Nick Cave's multi-coloured, frond-like creatures were turned into animations and bounced gaily down a small street, launching themselves over, around and above the pedestrians. As we reached the end of the lane and looked up to the roof of a building, a figure appeared, looking as powerful as any mythological monster, but for those familiar with Cave’s work, it was immediately identifiable as one of his Soundsuit dancers, originally created in response to racial profiling and racism. 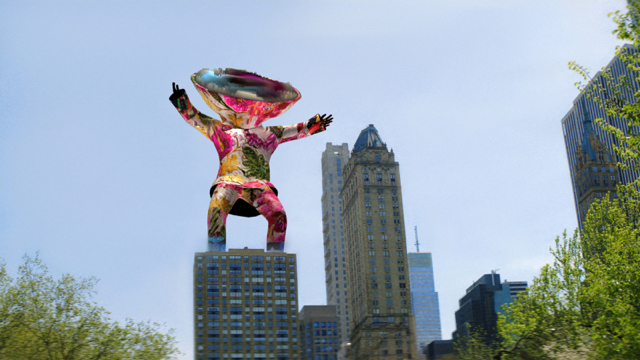 Each piece lasted no more than a few minutes and some used that time format in particularly rewarding ways. Both Cao Fei’s and Carsten Höller’s works were shown in a public square and both created abstract narratives that used the art and technology in ways designed to – albeit momentarily – upset the equipoise of the surroundings. Höller, known for conceptual, interactive, ludic work with more than a few references to hallucinogens, may have made one of the more unsettling pieces, titled Through. As I walked about the plaza, viewing it through the app, the trees, buildings, shops, and the people sitting or strolling about, all suddenly lost their mass and colour, turning into a delicate black-and-white drawing. That lasted no more than a minute or two, then this same drawing of the city morphed and became psychedelic, coalescing into a kind of mask or face with eyes that opened up, briefly turning into windows that revealed the plaza as it actually is.

Cao Fei’s Trade Eden was even more interactive. Once I anchored the app, a small factory appeared on the pavement of that same plaza. The factory was endlessly busy, shooting identical, and identically sized, cardboard boxes up and down an elaborate conveyor system. Fei compares it to a ‘roller coaster’, and in this piece, by tapping on the phone, I could control the flow of goods. After seeing my boxes all jumbled together in piles, I glanced at a fellow participant’s device and saw that each of his were neatly lined up in rows, our separate experiences illustrating Fei’s stated interest in order and chaos. Each of the boxes was labelled ‘Made in China’, perhaps a reference to the industrial city of Guangzhou, where Fei was born, or a comment on China’s increasingly global reach, but certainly another iteration of the old, yet true, comparison of contemporary life to a factory. 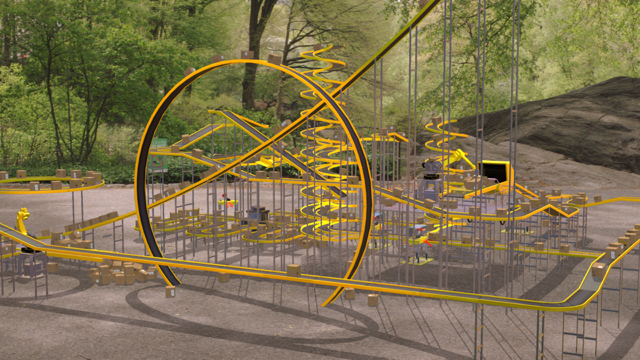 Pipilotti Rist’s piece faired less well. What looked like multi-coloured contrails shooting across the sky of a nearby pedestrian lane were accompanied by a crackling voice screaming out various words such as ‘mother’, which at first sounded like  a punk chant or near invective. That the piece ended with the word mother again – along with renew, reuse, recycle, thank you for our lives – may suggest some ecological statement, but frankly, watching Rist’s videos in a room, seated on benches or cushions, as they are often displayed, is far more immersive and powerful. AR’s inherent competition with the living world may be too much for some art. 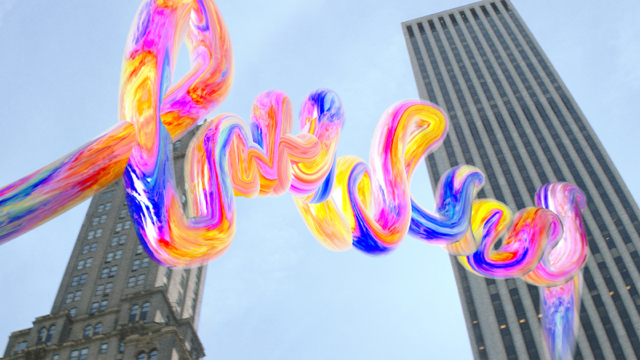 Claymation artist Nathalie Djurberg and sound artist Hans Berg sidestepped the vastness of an AR landscape out-of-doors by taking viewers across the lawns of the Yerba Buena Park via a series of captioned words that ultimately led to a stand of trees. There, the AR app created an animated hole in the tree’s trunk in which one could see a tiny, Claymation film short. Delightfully dark, and minutely realised, it was a slightly cryptic, existential conversation between a wolf and an apparently alcoholic old man.

In creating this event, Apple’s decision to commission these established artists is at least as interesting as the work itself. Like nearly everything this company does, there are implications. Putting this event on at this time is a strong indication that the legendarily secretive Apple is about to launch a new product with an AR app. It has already announced the software called ARKit. While ARKit is an open source code, it is also a code that works best on Apple products. And creating proprietary software, or proprietary relationships to software, has long been characteristic of the company. Artists might remember the company’s formerly close relationship with Adobe, which for years guaranteed that artists and designers were virtually locked in to Apple products for the ease of using those design tools. When they launched the iPhone in 2007, it wasn’t the first smart phone, nor even the first to connect to the internet, or to have a camera, but that iPhone, with its sleek size, its uncannily easy access to the internet through touch, and loaded with iTunes, became a sensation worldwide. Competition was, and continues to be, fierce, but, for better or worse, it is as fair to say that Apple rendered the smart phone primary to our lives akin to the way Coke ‘invented’ soda. 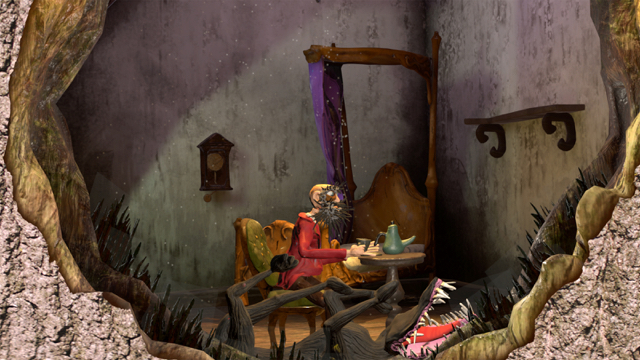 Nathalie Djurberg and Hans Berg, This Is It, 2019, Apple [AR]T, photo courtesy of Apple

Since 2017, under the direction of Tim Cook, Apple’s CEO, the company has been hosting art and design events for the public. These events give the company a softer public appearance, yet it is also part of their competitive strategy to regain dominance as the design company for user-friendly technology. When people describe Apple as a hardware company, it is true, in the sense that, unlike Google or Facebook, a large part of its profits do come from actual products. But it is important to remember that it has always been a company that continues to develop and refine software for those products, albeit often utilising technology after it has become well developed – as it did with iTunes, ApplePay and AppleTV, which relied on earlier MP3 technologies, contactless payments and video streaming respectively.

Apple succeeds because it makes technology appealingly accessible. The tools regarding geographical location and information about people and things in space have become incredibly robust over the past few years, so Apple’s foray into AR does now make sense. A tech entrepreneur who attended the [AR]T event told me that ‘[w]hat Apple and Google did was solve the two biggest challenges of AR … being able to track the position and rotation of a phone very precisely and … providing the [AR app] with some information about the user’s surroundings’. In an article on the CNBC website, Mike Boland, chief analyst of ARtillery Intelligence, was quoted as saying, ‘Apple in particular has invested a lot in AR and is banking certain parts of its future hardware line-up on AR, so these [AR]T walks are both a move to accelerate AR traction and to continue feeling out the demand signals and what will resonate with consumers’. 2

That last line may be key. If we worry about the free data accumulated by Facebook, Google and Amazon when we use them, that the clicks on social media have been found to create addictive dopamine rushes, or if we simply worry that both of these are potentially manipulating our behaviour – well, we should. 3

Jaron Lanier, computer engineer, philosopher and rising critic of the new, technologically charged social landscape, created the term ‘Siren Servers’ for companies such as Google, Amazon and Facebook. 4 If those companies are the Sirens beckoning us with information, products and social connections, and we are the sailors, Apple – the company that brought us the personal computer and popularised the smart phone – is the vehicle.

*  Sadly, the poet John Giorno passed away before this review went to publication. For further information about his life and work, see the obituary in The New York Times 13/15 October 2019